Get me outta here!

I just finished the BEST book. I’ll preface this by saying that it is a young adult novel, but it really doesn’t read like one.

The book is called Cinder by Marissa Meyer. It’s a spin on, obviously, Cinderella. But unlike the fairy tale, this book does not have a happy ending. 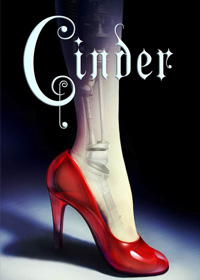 Okay okay, I won’t spoil anything. But here’s some info:

So this book takes place in the future, after World War IV, in New Beijing. Cinder, a cyborg mechanic, lives in a world filled with plague brought on by the race of “Lunar” people on the moon. Much like when Europeans explored the new world and brought Smallpox, the Lunar people would escape the moon because of their tyrannical ruler Levana, and come to Earth, bringing new diseases that Earthen people were not used to – the plague is called Letumosis.

The whole of New Beijing is excited for the ball that Prince Kai is the special guest for – they’re even suspecting that he’ll find a new bride there! Cinder’s stepsister loves Kai. Poeny is one of Cinders best friends, and would do anything for her, despite the fact that her cruel mother and other stepsister don’t care anything about Cinder and even blame her for the death of Garan, the father of the girls and husband of Adri.

As a very well known and renowned mechanic, even though she is only 16, she gets the attention of Prince Kai, who needs one his androids fixed. But the prince doesn’t know she’s a cyborg and the story progresses from there and takes some insanely crazy turns.

It’s been a little while since I’d read a young adult novel, and I was not disappointed at all. I’ve mentioned quite a few times that I’ve been reading quite slowly recently, but I read through this novel in 7 days, despite the fact that it’s over 400 pages.

This book is the first in a series of five books, and I’m so excited to read more. The day before I finished the book I bought the next in the series, called Scarlet which incorporates a Red Riding Hood theme.

So far, I can not rave highly enough of this book. Anyone who has been reading my posts for any amount of time knows how much I love fairy tales, how much I love young adult novels and how much I love science fiction. This book is all three, and is basically my perfect novel.

If you like any one of those three things, you will undoubtedly like this book. It’s fantastic.

Three Years of BloggingJanuary 27, 2018
The big day is here! I've been blogging for more than three years!